The History of the Whitcomb House 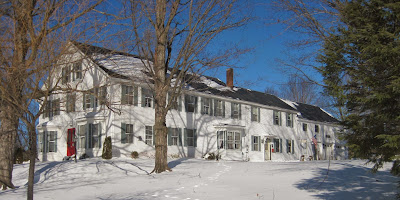 The Bridges Inn is located in a house built by the Whitcomb family, on a site originally settled by the Strattons.  It is of a distinct style, only found in New England, where there was a high-concentration of Yankee farmers.  We might call it an extended or connected house, while historian Thomas Hubka refers to it as, "Big house, little house, back house, barn". 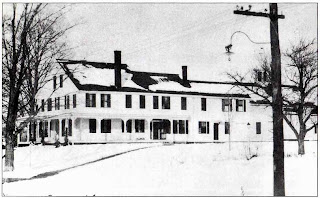 In the above picture, there are four different pitches on the roof, representing what is likely four phases of construction.  The barn is visible with the two garage doors and a flag, followed by the back house, which ends at the bay window (popular during the late nineteenth century).  The little house, employing Hubka's terminology, would include the bay window and the three windows above it.  Finally, in the front of the house facing Main Street, we find the original Stratton residence. Also visible in old photos of the house is a wrap-around porch that was removed about a half century ago.

Proceeding with a mixture of observation, guess work, and Hubka's research, we will take a look at how this unique house came into being.  The Whitcombs purchased the house in 1841, which at that time, may have been a typical cape, as in Cape Cod-style home, two rooms wide and one room deep, called by Hubka a hall-and-parlor house.  It is typical for that style of house to be built as a single story.  When the family could afford it, they would jack up the cape and build an entire first floor beneath the original home, sometimes with a lavish wrap-around porch, seen in the black and white photo below.

Looking at the photographs, we can clearly see that the front part of the house has a granite foundation, while the second part of the house, near the bay window, changes over to a brick foundation.  I conclude that the the Strattons built the granite part, while the Whitcombs constructed the parts of the house built on a brick foundation.  After purchasing the property, the Whitcombs, being Whitcombs, built an entire house attached to the original home.  This 1841 demarcation runs approximately up from the window in the center of the photograph below, where a door used to be. 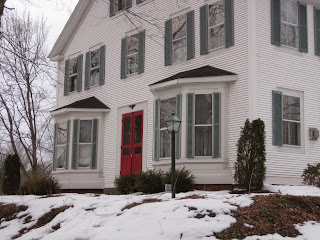 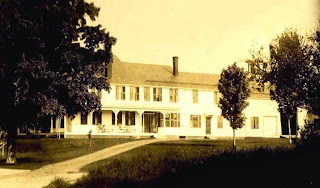 Yankee farmers were nostalgic for their fireplaces and reluctant to give them up.  The mantle and a roaring fire are all very romantic.  However, they are also quite drafty and waste heat, burning wood inefficiently.  Hubka reports that beginning in the 1840's, New England farmers made the move towards wood stoves.  Many farmers built what is called a summer kitchen, a room for the stove, which was used year-round despite the name. 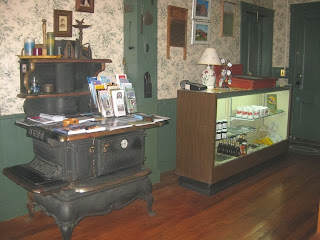 In the picture above, the old wood stove can be seen, as well as where its chimney used to connect to the wall.  In the background are the stairs that would have been immediately in front of the side door (now gone).  These stairs are steeper and more narrow than the other set of stairs, in the front of the house, which makes me wonder if these stairs were built after a chimney was removed.  The black and white photo above shows two chimneys, one for the wood-powered cooking stove and one for the boiler in the basement, to produce steam heat.  Prior to that, if there was a central chimney, it would have been where the staircase is, in the photo above.

The summer kitchen may have been built sometime after the Whitcombs moved in.  It is included in what Hubka calls the back house.  He says that after the 1830's, New England farmers could not compete with agricultural products shipped down the Erie Canal from Ohio River valley farmers.  Struggling to survive, they became involved in home industry, especially during the winter months.  In the back house, which we call the tea room at the Bridges Inn, yankee farmers may have processed food, carved trinkets, and produced items for sale, such as wooden chairs and tool handles. 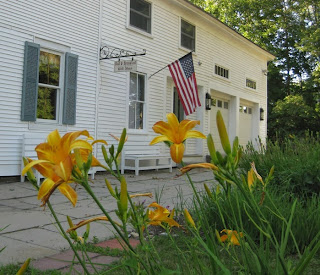 Finally there is the barn, beginning with the sign (at the left of the flag) until the end; radiators installed in the barn indicate that the barn was once heated.  The garage doors may have been built for carriages. The short, wide windows would have been just right to slide down bale of hay, to eagerly awaiting horses.  New England farms struggled through the nineteenth century, until the advent of refrigerated railroad cars created the dairy market and brought financial stability to the farmers.  At that point, however, it may have been too late.  Many New Englanders left home for the promises of the West, and many New England towns celebrated Old Home Days to invite their children back from the cities.

The Whitcomb House may be unique in that it was never a working farm.  The railroad came through West Swanzey, so products were produced for the market.  The Whitcombs owned some land and had access to trees, allowing them access to plenty of lumber.  They produced buckets and other containers, before the age of corrugated cardboard, shipping them on the railroad.  The ruins of their factory can still be seen down Prospect Street, beyond the Inn, with a prominent smokestack, protruding from what must have been a foundry (to make nails for the buckets).

The house stayed in the Whitcomb family until after Edna Whitcomb's death in 1961. By then, most of the construction was completed. For about thirty years, private families lived here.  Then in the nineties, the Munsons converted the home into a bed and breakfast. They sold the property in 2001, and in 2006, the current innkeepers bought the historic property.
Posted by Anonymous at 1:04 PM