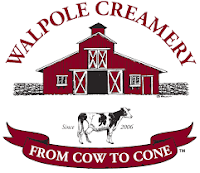 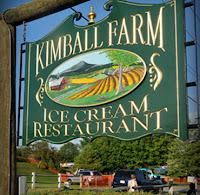 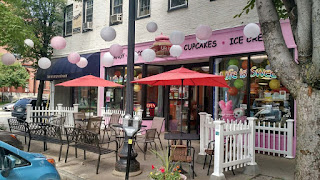 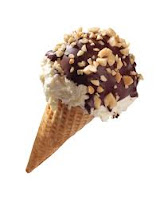 The Monadnock Region is a beautiful place to explore for several reasons.  There is something for everyone, but the highlight of the region may be the mountain whose name it bears. Late spring is a beautiful time of year to hike Mount Monadnock, not too hot and not too cold.

"Monadnock" is said to be the local Abenaki word for "mountain that stands alone" and from the top, it can be seen that few other large peaks are nearby. Mount Monadnock is generally considered the second most climbed mountain in the world; only Mount Fuji in Japan is climbed more. Mount Monadnock is 3,165 feet tall.  While it may not seem very tall, as far as mountains go, it can be a challenge to climb and physically demanding.  But for someone who is prepared, it can be a very rewarding climb. Many trails of various distances and grades all lead to the summit, where you can see in all directions for as far as the eye can see. 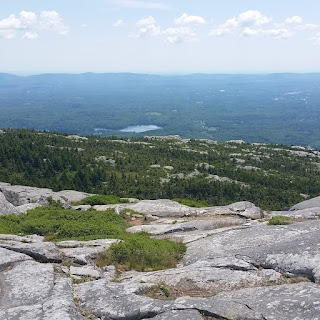 The White Cross and the White Dot Trails run to the summit from the headquarters.  Both trails are under four miles round-trip and considered to be strenuous routes to the summit.  Bald Rock awaits hikers, offering a glimpse at things to come.  Parts of the trail may require using your hands to climb. These trails should give you a good work-out. 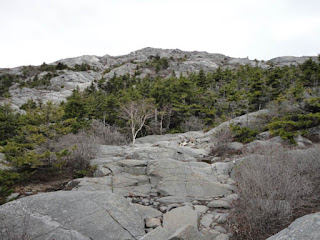 Just north of headquarters on Dublin Road, you'll find Gilson Pond, where there is a State campground as well as the Birchtoft/Red Spot Trail.  This trail is three and a half miles, beginning quite gradually and then quickly ascending the mountain.

On Route 124 in Jaffrey, there is another State Park Ranger station.  It consists of a small shed and a parking area.  All of the State facilities will charge five dollars per adult.  This trail here on Route 124 runs past the site of a former hotel, so it is called the Old Halfway House Trail.  There is a network of trails; the main trail follows the white arrows.  It is three and a half miles to the summit and back. Some people have hiked it in less than three hours. Shown below near the beginning of the Old Halfway House Trail and then closer to the top is our little Eduardo, now nine years old, who has been hiking Mount Monadnock with his family since he was a toddler. 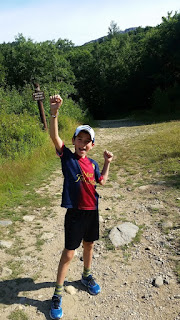 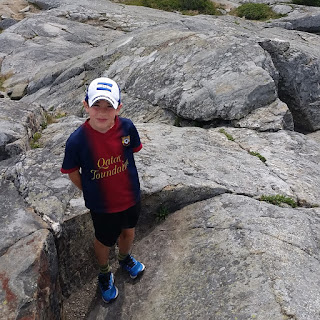 The White Arrow/Old Toll Road, which may be the most popular trail.  The first half is easy because there is the option of a forested trail or a dirt road.  However, the second half quickly begins to start feeling like you are climbing a mountain.  The trail is mostly covered in boulders and stones, and some places are rather steep, but it is possible for those who push themselves. 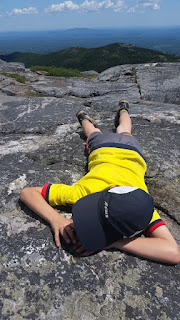 Eduardo needed a rest at the top

The Dublin Trail is a little over four miles, running in a line up the mountain's north face.  Since it is not a State facility, there is no parking fee.  It is also a less crowded trail, which is important because Monadnock can be quite busy during the nice weather, especially on the weekends.  The Dublin Trail is moderately difficult, but worth the effort.  A small parking area can be found on Old Troy Road in Dublin, near Dublin Lake and Route 101.

Also ascending the mountain from the Dublin Lake area is the Pumpelly Trail.  It is the most challenging trail. The summit is four and a half miles, so it is nine miles round-trip and would take an entire day to hike.  The trail is noted for its views, particularly during foliage season, as well as interesting geological formations.  There is also a notable absence of other people. 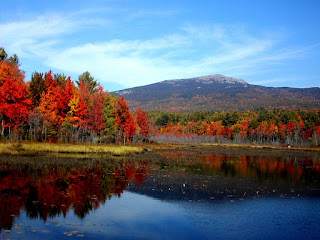 Finally, there is the Marlborough Trail.  It can be reached from Route 124, on Shaker Farm Road in Marlborough.  Each way is a little over four miles, because the parking area is a distance from the base of the mountain.  There is a lot of tree and plant life to be seen, and rocks to be explored.

Additional information about hiking Mount Monadnock can be found on the Monadnock Travel Council's website.