Guests are always asking about the covered bridges.  There are six in the area, all quite close together and easy to visit in one loop.  The loop is just over 30 miles and can be done in an hour.

The tour begins at the Thompson Bridge, just a few hundred yards from the Bridges Inn at Whitcomb House, where all the guest rooms are named after the local covered bridges.  The Thompson Bridge has also been known as the West Swanzey Covered Bridge and the Old Covered Bridge, but today it bears the name of famous Swanzey native Denman Thompson.

Continue west on California Street to Route 10.  Turn right, traveling north, for a mile.  Take a right onto Sawyer's Crossing Road and follow for two miles to the Cresson Bridge, also known as the Sawyer's Crossing Bridge. 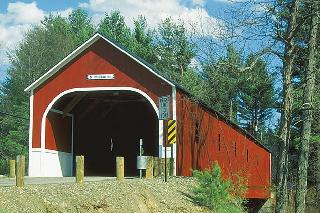 Continue until you reach a T-intersection with Eaton Road. Go left and soon bear right onto Route 32 heading south.  In 1.3 miles, you will reach Carlton Road on the left.  Drive a short distance to Carlton Bridge, which has the cozy feeling of an old barn. 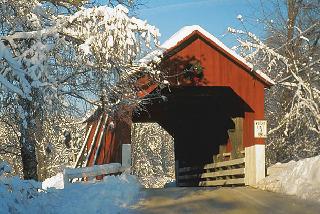 Turn around and return to Route 32.  Take a left and continue south for a half mile. Turn right onto Swanzey Lake Road. At the end of the road, after 4 miles, you will reach a T-intersection. Proceed left onto  Holbrook Avenue.  After three-quarters of a mile, make a sharp right onto Westport Village Road.  You will pass through the Slate Bridge, which was destroyed by fire in 1993 (left, shown pre-1993) and reopened in 2001 after being rebuilt (right, shown after 2001). 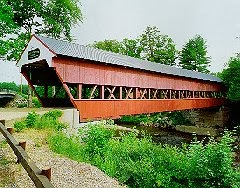 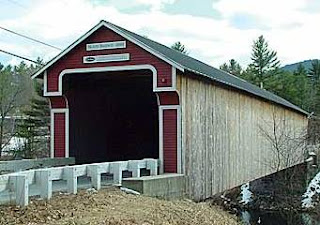 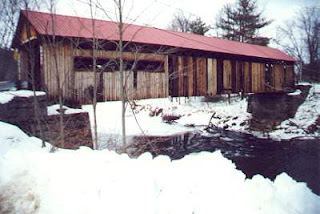 Turn around and return to Route 10. Take a right onto Route 10, traveling south for 5.4 miles to Winchester.  At the second traffic light, turn right onto Route 119, heading west towards Brattleboro. Go two miles and the Ashuelot Bridge will be on the left.  Considered by local historians to be one of New Hampshire's most elaborate covered bridges, it is 159 feet long, painted white with a red roof.

Going back the way you came, turn right onto Route 119, continuing east for two miles. Take a left onto Route 10 heading north. In just over 10 miles, take a right onto California Street, go through the Thompson covered bridge, and the Bridges Inn at Whitcomb House is the fifth house on the left.

Click here for additional information on The Covered Bridges of Southwest New Hampshire.